Men are less likely than women to acknowledge illness or to seek help when sick, and men aged 20-40 are half as likely to go to their GP as women of the same age

For 17 to 30-year-old English domiciled first-time participants in HE at UK HE Institutions, and at English, Welsh and Scottish Further Education Providers, the  figures for men/boys are 150,085 and for girls 183,325 (2018).

More than one in four exam entries by girls aged 16 received top grades of A or 7 and above in this summer’s exams in England, Wales and Northern Ireland, an improvement of half a percentage point to 25.3% compared with last year, while just 18.6% of entries by boys in Year 11 achieved the same grades. Guardian.

For 2018/19, the Department for Education produced this: 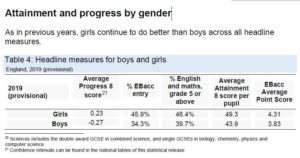 More women achieved A*-C grades than men (77.6% grades compared to 73.7%), which meant that females received 76,891 more A*-C grades in total than men, due to a greater number of women taking them.

Apprenticeships / entry to the professions —

Fewer men than women are becoming teachers, GP’s, dentists, vets and lawyers every year. Female GP trainees outnumber their male counterparts by more than 2:1 across the UK and women are now in the majority for all age groups under 50 in the general practice workforce.

In 96% of cases, the parents who apply to court for access to their children are men

86% of rough sleepers in England are male

84% of the “hidden homeless” are male

Men are nearly twice as likely as women to be a victim of violent crime and among children, boys are more likely than girls to be victims of violence

Over two thirds of murder victims are male

Men make up 73% of robbery victims

98.6% of UK military deaths in Iraq and Afghanistan were male

Only 51% of men tell anyone they are a victim of domestic abuse (81% of women tell someone).

In terms of refuges/safe houses, currently, there are 37 organisations with 204 spaces with only 40 of those places are dedicated for men. Many parts of the UK have no or limited places at all.

One in five victims of forced marriage are male

12,000 men are raped in England and Wales every year

The Government and the Crown Prosecution Service have an Ending Violence Against Women and Girls Strategy, but do not have an equivalent strategy for men and boys