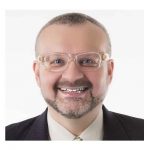 Jonny Gould is a charismatic broadcaster, event host and entrepreneur.

His journalistic career continues at Sky News and the BBC as a news commentator and sports pundit and as an ambassador for Striker Boy, a mental health awareness campaign with MIND, in memory of his friend and cousin, the children’s author Jonny Zucker.

Jonny Zucker took his own life in 2016 leaving his wife, Fiona and three boys.

“I’ve always had an ear for male issues and events within my own family have only served to sharpen this. I’m really looking forward to getting involved in the Coalition.”

He’s married to Karine and has two adorable young girls.