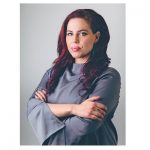 Natasha Devon MBE is a writer and activist. She tours schools and colleges throughout the UK, delivering talks as well as conducting research on mental health, body image, gender and social equality. She campaigns both on and offline to make the world a fairer place. Her current projects are the Mental Health Media Charter and wheresyourheadat.org, which aims to change the law to protect the mental health of British workers.

Natasha regularly speaks at Parliament and gives evidence to the Education and Health Select Committees, representing the interests of teenagers and teachers. In 2015 she was awarded an MBE for her services to young people and in 2016 the Sunday Times and Debretts named her one of the 500 most influential people in Britain.

Natasha writes regularly for the Guardian, is a former columnist for Cosmopolitan Magazine and currently has a weekly column in the Times Educational Supplement. Her ‘mind manual’ — ‘A Beginner’s Guide to Being Mental: An A-Z’ — was published in May 2018, by Bluebird Books at Pan MacMillan.

Natasha is a patron for the charity No Panic, which provides advice and support for people struggling with anxiety. She is also a fellow of University of Wales: Aberystwyth and advises them, as well as Coventry University: London, on campus wellbeing.