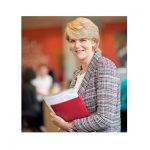 From 1994 – 2001, she was Chief Executive of BII, the professional body for licensed retailing.  Between 1997 and 2001, Mary served as a Council member on the Further Education Funding Council (FEFC). She was a Non-Executive Director of Laurel Pub Company, and Chairman of award-winning e-learning company, Creative Learning Media, both from 2002 – 2005.

Mary has an MSc in general management from the London Business School. She was awarded an OBE in the Queen’s birthday honours 2000 for services to training in hospitality and tourism.  She is a governor at Swindon Academy – a 3-19 school, and of Magdalen College School in Oxford.  In addition she is a trustee of the Access Project which supports young people from deprived backgrounds to progress to selective higher education. She is also a trustee of the National Star Foundation which provides highly specialist care and learning support for young people with complex physical and learning difficulties.