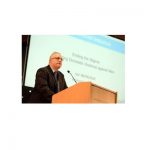 Ian is a survivor of both Domestic Abuse and Sexual Abuse.

Ian has shared his traumatic events via both local and national Media Outlets and presented at numerous Conferences in order to raise awareness and enhance existing levels of understanding within the Domestic Abuse profession therefore encouraging more Victims to come forward.

Ian is an Ambassador for “Men Reaching Out” and a member of both the “Employers Initiative on Domestic Abuse (EIDA”) and the “Men & Boys Coalition”, a network committed to highlighting and taking action on the issues that affect men and boys.  For over a decade, Ian was an Ambassador of the first National Charity in Britain, (The ManKind Initiative,) which supports Male Victims of Domestic Abuse. And their children

Ian has acted as a Consultant to “Coronation Street” on their Male Victim (Tyrone,) of Domestic Abuse Storyline.